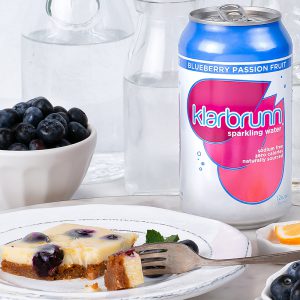 The measurement for the graham cracker crumbs is different depending on whether you buy premade crumbs or crush your own from graham crackers. To reach the 150 g, you’ll need roughly 1 cup of premade graham cracker crumbs or roughly 1 ½ cups if you’re crushing your own crumbs from full graham cracker sheets. This recipe calls for ½ cup fresh lemon juice, and creates a tart lemon filling. I love it this way and think it balances perfectly with the sweetness of the crust. If you don’t want yours to have a tart flavor, only use ⅓ cup fresh lemon juice. If you’re using Meyer lemons, don’t reduce the amount of lemon juice. Don’t overcook the blueberries. The short baking time is very important, and you want to get the blueberries out of the oven before they burst. If the blueberries burst it completely changes the aesthetic of the dessert. It will still be delicious, but it will have a much more rustic look. Along those same lines – if you don’t want any visible blueberry streaks along the edges of this dessert, you have to be careful when cutting the bars. Use a larger knife and press it straight down (rather than dragging it to cut). You’ll also need to wash the knife after each cut (a little tedious, I know, but the end results are beautiful and so worth it). If you make this gluten free, use certified gluten free graham crackers crumbs and stir in 1 Tablespoon of psyllium husk before adding in the melted butter.
proadmin2022-11-04T15:37:17-05:00
Page load link
Go to Top